Save Your SearchRefine Search

See our available historic homes below. Contact Monarch Realty to schedule a showing or to learn more.

Create an account to save your favorite listings and to get updates on similar properties.

One distinctive aspect of life in the northeastern U.S. is the region's history. The earliest European settlers that came to America did so in what they aptly named “New England”; apart from a few native American Pueblos of the west, New England boasts the site of the nation's oldest, continuously occupied and most historic homes. This home, built in two stages, 1750 & 1850, has been lovingly preserved and updated over generations and provides the next fortunate owners 2,100 SF of home sweet home. Don't expect the latest here but expect authenticity and a friendly warm feeling that wraps around and holds you. There's plenty of room inside and outside as well thanks to over an acre of land for play, gardening, hobbies, or just plain relaxing. The active railroad tracks at the rear of the property carry several trains a day, great for enthusiasts. Information from the Historic Site Marker placed on the property: EARLY EIGHTEENTH-CENTURY SETTLEMENT This site commemorates the gateway of Vermont's earliest Dutch settlement, the Rensselaerwyck Manor settlement. The Diel Homestead, built by Bastion Diel in the early 1700's is considered the second earliest dwelling in Pownal. The property's large Dutch barn still stands across this historic roadway, today's Route 346, which passes through Massachusetts, Vermont, and New York. Bastion's grandson, Mikel Diel, also lived here, was a Green Mountain Boy under Colonel Seth Warner, and fought at the Battle of Bennington August 16, 1777. 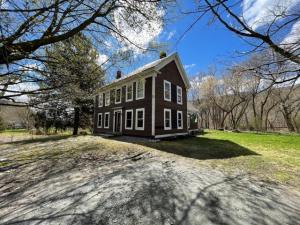 A treasure of local history one of the distinctive aspects of life in the northeastern united states is the region's history. The earliest european settlers that came to america did so in what they aptly named ''new england'' and apart from a few native american pueblos of the west, new england boasts the site of the nation's oldest , continuously occupied and most historic homes. This home, built in two stages, 1750 and 1850, has been lovingly preserved and updated over generations and will provide the next fortunate owners 2,100 sf of home sweet home. Do not expect the latest here but expect authenticity and a friendly warm feeling that wraps around and holds you. There's plenty of room inside and outside as well thanks to over an acre of land for .... See more for continued remark

Listed by Paul A. Harsch III of HARSCH ASSOCIATES 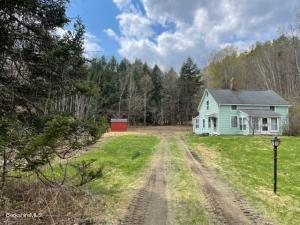 This parcel with a historic home represents an interesting project for the buyer. The house itself may not be worth saving. The ceilings are about 6' high if that, the rooms small, the foundation is stone and there will need to be a new septic system installed. The current spring house may also need to be replaced with a drilled well. According to the town records, the1,088 sf house dates to 1830. The rooms are small, there is just one bath and there is some structural repair that would be needed. The setting is quite appealing, with an active year-round stream bisecting the property. It may make more sense to remove the old house and build a new highly energy efficient home set a little further off the road and enjoying closer proximity to the brook or in the pretty meadow just up hopper.

Listed by Paul A. Harsch III of HARSCH ASSOCIATES

Pristine brook front colonial. From the ground up and the walls in this historic home has been brought up to contemporary standards with continuous improvements and spare no effort maintenance. Offered with all furniture included. Situated on a lightly travelled road and bordered by over 300 feet of mountain pasture brook the large backyard features outdoor dining, a fire pit and brookside swing and hammock. Upper and lower covered decks overlook the action. On the main level: a custom built kitchen with stainless appliances and reclaimed hardwood countertops; the dining room panelled in reclaimed red barnboard; the living room with functioning wood burning fireplace; a den -which can be used for extra sleeping quarters - with sliding barn door and in the office a built in custom desk 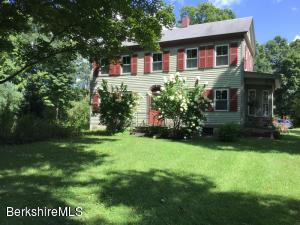 This charming, historic home sits on 62 acres of fields, forest, and hills. The front section dates from the early to mid 1800s and the back section dates from the 1790s. It has been in the same family since 1905. Original features include pine and oak floors, old farm kitchen, carriage room, sewing room, and parlor. Set on a quaint country road, the beautiful konkapot river runs through the property. Fabulous opportunity!!

Listed by Claire Naylor Pollart and Lance Vermeulen of LANCE VERMEULEN RE, INC 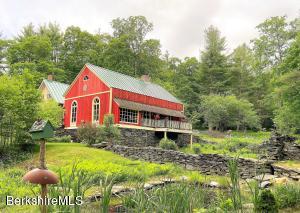 Beautiful storybook 1840 historic home with a peaceful private setting, get away from it all! This artfully restored home offers a high level of comfort and many exciting fit and finishes not found in many homes. From the kitchen with original nyc subway tiles to the massive fireplace constructed with boston curbstones, this home is truly unique. Hike in your woods or enjoy swimming or fishing in your one-acre pond while marveling at the imaginative landscaping that truly sets this home apart. A pure blend of rustic and refinement located conveniently between northampton and the berkshires in beautiful hampshire county. *high speed internet* 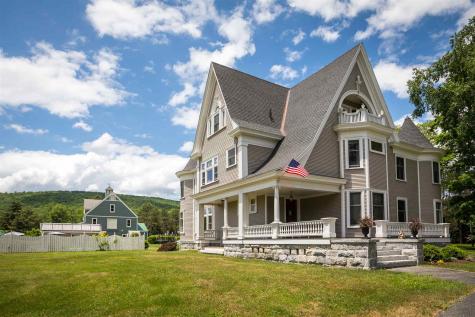 The best that Southern Vermont has to offer with this stunning home. Featuring barn, equestrian and farm lifestyle, acreage, pastures and in-ground pool. Listed in the National Register of Historic Places and cited in Wikipedia, the home was built by John Tudor circa 1900. With meticulous attention to detail, the home offers stunning woodwork throughout. The 6 bedrooms are either en-suite or have their own sitting rooms with views of Mt Greylock in the Berkshires of MA. Four beautiful fireplaces add to the ambiance of this historic home. A modern, updated kitchen, large dining room, breakfast nook and convenient butler's pantry make entertaining a dream. Along with in-door entertaining, step out into the private, serene back yard to entertain guests at the in-ground pool with its own outdoor kitchen and bathroom. There are nearly 10 acres of flat, lush grounds. A lovely, fenced pasture for horses to graze. Fruit trees are well-established just waiting to be picked. If that isn't enough, enjoy the scenic backdrop surrounding a 3 story post and beam barn which includes 5 horse stalls, tack room and hayloft. What equestrian wouldn't want to ride and then lounge by the pool with a mint julep? This stunning property is near Mt Snow Ski Resort, Haystack Golf Course, Williams College, MASS MoCA, Albany Int'l Airport, Tanglewood, Clark Art Institute and more. She's a beauty. Should she be yours?

“The Colonial” One of the original “cottages” on historic Taconic Avenue. This home has been painstakingly renovated with a huge modern kitchen, all new windows, and updates throughout. This home still maintains its old world charm. However, new electrical and plumbing updates, breathes new life into this historic home. First floor has multiple sitting areas and a formal dinning room. The second floor has 4 all new bedrooms and 3 fully renovated bathrooms. Twin on-suites with a must see master bath. Unwind in the soaking tub with views of Mt. Equinox. Third floor has extra space and bedrooms for guests. Entertain on a wonderful wraparound porch with outdoor seating and dinning. A detached carriage house offers a potential in-law apartment or large work from home office. This home is truly a must see gem in historic Manchester Village. Please call to arrange a showing.

Copyright 2021 New England Real Estate Network, Inc. All rights reserved. This information is deemed reliable, but not guaranteed. The data relating to real estate for sale on this web site comes in part from the IDX Program of NEREN. The information being provided is for consumers' personal, non-commercial use and may not be used for any purpose other than to identify prospective properties consumers may be interested in purchasing. Data last updated June 12, 2021.

Based on information submitted to BCMLS  as of June 12, 2021 . All data is obtained from various sources and has not been, and will not be, verified by broker or BCMLS.  All information should be independently reviewed and verified for accuracy. Properties may or may not be listed by the office/agent presenting the information. NOTICE: Many homes contain recording devices, and buyers should be aware they may be recorded during a showing.